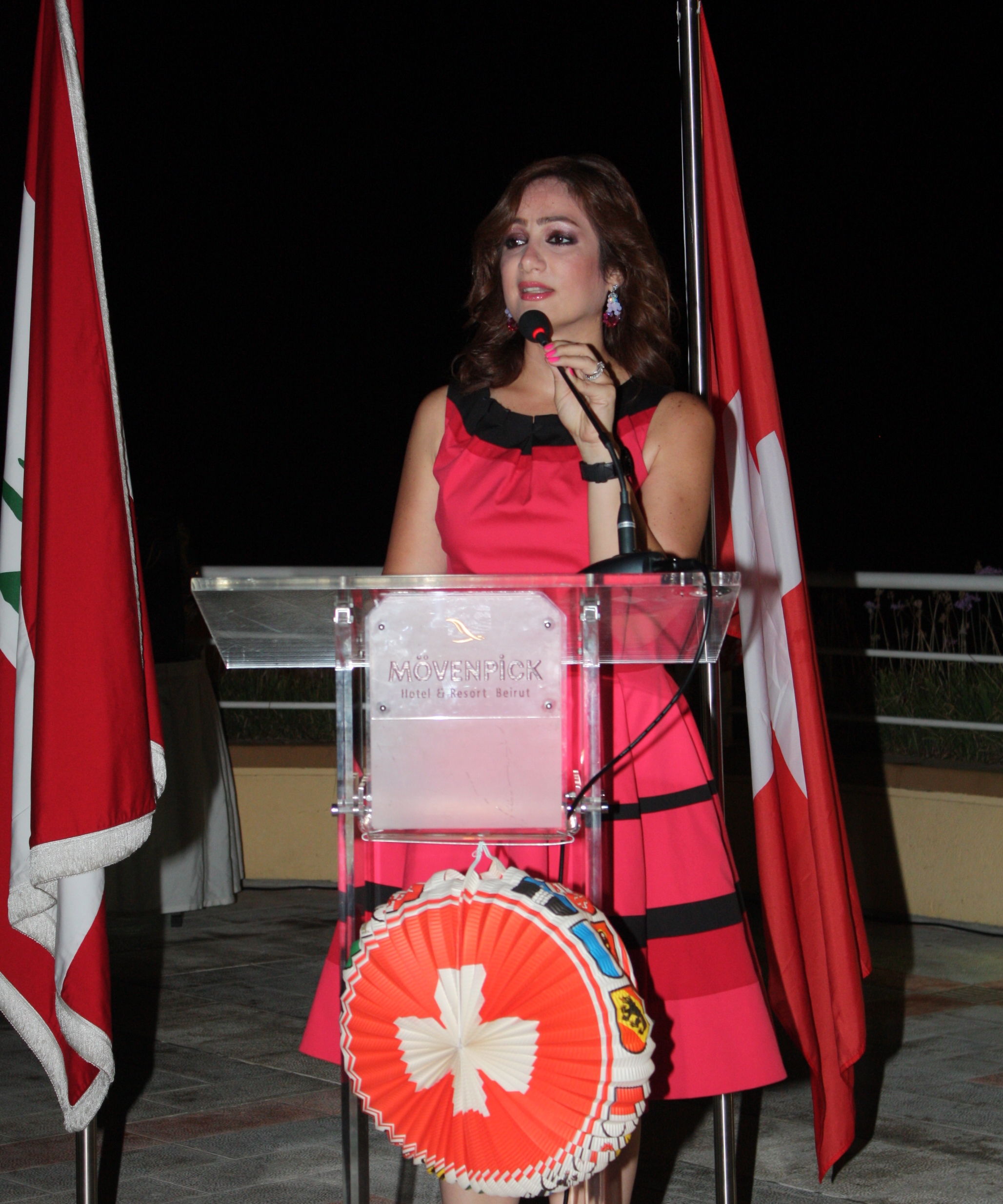 SWISS NATIONAL DAY
The Club “Les Amis de la Suisse” has made it a yearly tradition to celebrate the Swiss National Day with the family and friends of the Swiss community in Lebanon.

This year the event took place at Mövenpick Hotel and Resort Beirut on Sunday 31
July 2011. The Swiss Business Council-Lebanon brought its participation to the
event and Mrs. Yasmine Berbir, Vice President, was invited to address the crowd
on behalf of the Board of Directors.

Mrs. Berbir greeted and welcomed Her Excellency, Mrs. Ruth Flint, Ambassador of
Switzerland to Lebanon, and the respectful guests.
She took the opportunity on this special occasion to wish the Swiss expat community
in Lebanon & the dear friends of Switzerland a Happy National Day.

Mrs. Berbir continued saying: “Today is an evening with vibes and ambiance that will bond you with your home country. Lebanon is proud as well to embrace you here to commemorate this day.

Both Switzerland and Lebanon have always enjoyed and cultivated strong relation ties, business exchange and spirits of solidarity.

The famous cliché of Lebanon being nominated the Switzerland of the Orient has always elevated Switzerland to be iconic for the Lebanese and a resemblance of beauty, quality and peace.

On behalf of my Swiss Business council colleagues we promise to harvest a robust, close knit cooperation and infrastructure that will promote further the trade & business platform between the two countries.

Our business council is young and promising. Thanks to those who contributed to establishing the building blocks of this council which is considered the business arm extension of the Swiss Embassy.

A new board has been elected end of June headed by Mr. Habib Hatem , and is looking forward to revive the SBCL and initiate some projects which will fortify our mission and flourish communication among members, between governments, explore new business opportunities and facilitate building bridges of common understanding that enhance business prosperity.”

At the end of her speech Mrs. Berbir thanked the club “Les Amis de
la Suisse” and in particular, its president Mrs. Astrid Fischer for the
beautiful gathering.

During the event, a special Swiss menu buffet was served by
Mövenpick Hotel and the wine was presented by KSARA from Mr.
Zafer Chaoui to the guests who meanwhile enjoyed live
entertainment by Lydia Canaan.

At the end of the event a tombola was organized and valuable gifts were
offered by SBC-L members such as Nestle, AMC, Euroliban, Tabbah,
Swatch, I.Hakim Doweik, Nespresso, and many more…